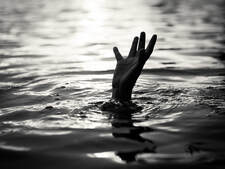 ​During an extremely hot summer in 1965, 4-year-old Roger Lausier’s parents had taken him to the beach in Salem, Massachusetts. He was having a great time. Building sand castles, watching the waves crash into the cliffs, and enjoying the sunshine. At one point, there was a drop-off on one of the hills. He soon found himself in the water. Not knowing how to swim, he tried to cry out, but the water sucked into his lungs. A moment right before he was about to drown, strong arms grabbed him. A woman carried him to shore.

Roger’s parents had blamed themselves for taking their eyes off their son for a moment. They thanked her immensely. Her name was Alice Blaise. Roger never forgot her.

Nine years later, Roger, now 13, returned to the same beach. He was very strong for his age and decided he’d go for a swim. As he began to lay his towel out, he heard a faint crying out for help. He quickly turned around and saw two arms waving in the deep water. A man was fighting for his life. Roger quickly grabbed a raft and began paddling water out to the man. He reached for his hand not a moment too soon. Roger put the man on the raft, and swam back to shore.

​Later, he found out a very strange piece of information. The man’s last name was Blaise. His wife was Alice, the lady who had saved Roger 9 years prior.
from Amazing True Stories by Don L. Wulffson
Powered by