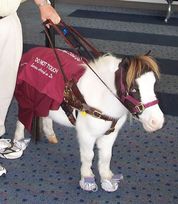 Many people with visual impairment use guide dogs to help them get safely from place to place and to alert them to danger. But what can blind people do if they are allergic to dogs or just don’t like them? For some people, the answer is provided by the Guide Horse Foundation.
Janet and Don Burleson founded the nonprofit organization in 1999. They began training miniature horses to help guide visually impaired people. Miniature horses look just like regular horses, only much smaller. They are generally less than 34 inches tall.

Cuddles was the foundation’s first guide horse in full service. She became 45-year-old Dan Shaw’s helper. Shaw has an eye disease that caused his sight to deteriorate. One night, while filling out an application to get a guide dog, Shaw heard a news story on TV about people training horses to guide the blind. Shaw loves horses and wanted a guide animal that would live a long time. He applied, and a year later, Cuddles and Shaw began training as a team.

On a trip to New York, Cuddles helped Shaw safely navigate Times Square, a very busy part of the city at night. The next day, Cuddles calmly rode the elevator with Shaw to the crowded top of the Empire State Building, a famous skyscraper. Cuddles even guided Shaw on the ferry ride to the Statue of Liberty, rode the escalator in a store, and traveled on the subway system.
​
Shaw says that he feels truly blessed to have Cuddles. He believes that Cuddles has changed his life for the better by giving him more independence and self-reliance.
Quia Quiz
Service Animals 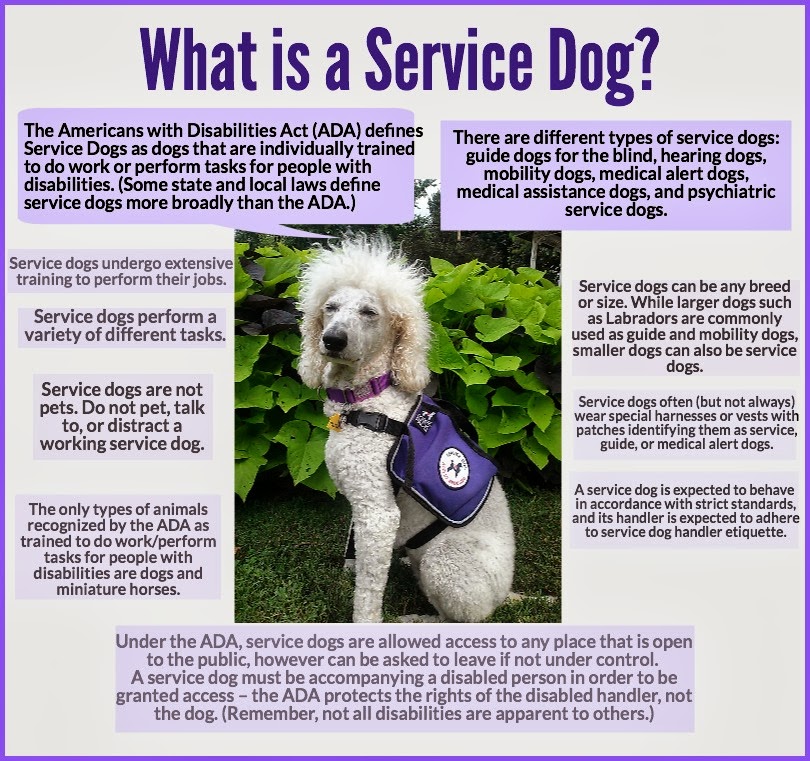 All dog owners think their dog is the smartest, but researchers have determined the most intelligent dog breeds based on more objective measures—a dog’s abilities to learn, solve problems, and obey commands. According to scientists, the 10 most intelligent breeds of dog obey a command 95 percent of the time and require fewer than five repetitions of a new command to learn it.

A dog’s intelligence is not necessarily affected by what the dog is bred to do. The tenth-smartest dog is the Australian cattle dog, which, as it name suggests, is used to herd cattle. In ninth place is the Rottweiler, originally used in Germany to pull carts. Today, it makes an excellent guard dog. The golden retriever, fourth, is very popular around the world as a hunting dog and a companion.

The most intelligent breed of dog is the border collie, which excels at doing jobs and following commands. This dog, like the Australian cattle dog, was bred to herd sheep. Border collies must be able to listen closely and pay attention to their owners’ commands. One border collie named Betsy understands more than 300 words. She is able to learn a new command as fast as a human toddler and is more intelligent than most of the great apes.

At the other end of the scale, the Afghan hound is considered the least intelligent dog. However, it’s very likely that Afghan owners would disagree with this ranking. 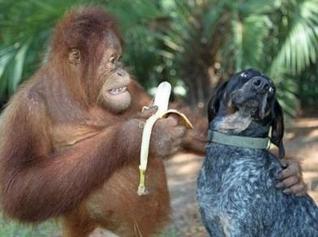 Are Humans the Only Animals with Emotions?

Do animals besides humans have emotions, and if so, which ones? Scientists and animal lovers often debate this issue. In the past, many scientists believed that animals were not capable of showing complex human emotions such as empathy. Empathy is the understanding of and sharing in another’s feelings. For example, if your little brother’s turtle dies, you probably would feel bad for him.

Several recent experiments and observations support the theory that animals feel empathy. In 1964, one study showed that rhesus monkeys would not accept food if another monkey got an electric shock. Likewise, biologist Marc Bekoff reports that when he was watching elephants in Kenya, he noticed an elephant that had been crippled for years. Although the elephant moved very slowly, the herd never left it behind. They’d stop walking, check on her, and then wait for her. Bekoff also tells of Alaskan bear cubs that were orphaned when their mother was shot. One cub had been wounded, so he limped along and swam painfully slowly, but his sister never left his side. She even fished salmon out of the river for him.

There are reports of animals showing emotions besides empathy, too. In 2005, a humpback whale became tangled in fishing lines off California’s coast. After divers freed the whale, it played with and nuzzled each diver, seeming to show gratitude. Gorillas, llamas, and many other animals appear to express grief when a mate dies, and then there’s the story of the two abandoned terriers that were taken to an animal shelter. When one of them went blind, the other led his companion around the new environment by the scruff of the neck until the blind dog learned its way around. Maybe humans and animals aren’t so different after all.
Quia Quiz 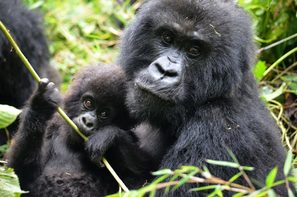 On the slopes of central Africa’s Virunga Mountains and in nearby Bwindi Park, there are forests filled with dense growths of trees and plants that are green year round. Mountain gorillas, members of the great ape family, live in these misty, rainy forests. Because their habitat is cool during the day and cold at night, these gorillas have hair that is longer and thicker than that of their close relatives, the lowland gorillas.

A full-grown male mountain gorilla can weigh over 400 pounds. Because his back is covered with silvery hair, he is called a silverback. Although he is powerful, he has a placid nature. He leads his family to food, plays patiently with his youngsters, and rarely fights. He behaves in an intimidating way only when he feels threatened. Then he will roar, stand upright, bare his teeth, and beat his chest with his hands to show his supremacy.

The adult female is much smaller, weighing about 200 pounds. She is a conscientious and loving mother who cradles and protects her newborn in her arms. When she travels, her tiny baby clings tightly to the hair on her chest. When the baby is older, it rides on her back.
Mountain gorillas live in small family groups, headed by a silverback. The group spends much fits time feeding on the plentiful vegetation of the forest. An adult male often devours more than 50 pounds of such things as berries, thistles, roots, stems, shoots, and leaves in a single day. At midday, after a morning of wandering and eating, the group stops and rests. They groom each other, picking out burrs and insects. Then the adults lie down on the ground and doze. The youngsters chase each other, wrestle, and climb trees. When the silverback awakens, the group moves on to forage for more food. They walk on all fours, resting their weight on the soles of their feet and the knuckles of their hands. At night, they make leafy nests on or close to the ground in a sleeping place chosen by the silverback.

There are many sounds, gestures, and facial expressions that mountain gorillas use to communicate with each other. They smack their lips, pat the ground, chuckle, and grunt. When they are resting and feel contented, they make a soft belching sound.

With only about 650 left in the world, mountain gorillas are endangered. A number of organizations, aware of their plight, are working hard to protect them from hunters and save their forest homes from loggers and farmers. Only if their efforts are successful will these peaceful apes live on.